“What’s important is not your emotional reaction to something, but how you hold and interact with that emotion”

It will continue to become clear that 9/11 was a turning point for our country. Not because we were attacked. Because of the way we responded to being attacked, which was far more damaging (to us) than the attacks themselves.

The Example of Tom Fox

Tom was a Quaker who, when our thirst for vengeance threw us into conflict with Iraq, felt led to put himself at risk by traveling into the middle of that conflict to be a peacemaker.

Tom endured the criticism of self-proclaimed “patriotic” Americans, personal sacrifice and even his own death to follow his leading for making peace in Iraq.

A Call to Forgive

As I was looking around for images for the music video that I released today about Tom Fox, I stumbled across this one: 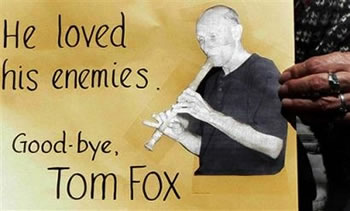 When I lash out at someone, it is most likely because I am in a very difficult place myself. Doing violence to another being is a symptom of my ambivalence about my own existence, and devaluing another’s life solidifies my lack of value for myself.

We cannot all be Jesus, or Tom Fox. But can we all see that we are called to healing, that hurting people who hurt us is asking for more hurt? Healing has to start somewhere. I know it might feel like I’m asking a lot (and I am), but why not let it start with us?