I couldn’t see devoting myself to an extremely risky line of work for the sake of nothing but my faith in my own talent. My studies at Guilford pinballed my professional future between subjects in which I have a peripheral interest: psychology, sociology, restorative justice, philosophy. Then I discovered Quakerism. I should say, I re-discovered Quakerism.

The Beginnings of My Vocational Discernment

During my senior year at Guilford (‘05-’06), there was an active discussion about vocation. “Where my great passion meets the world’s great need” was the phrase bouncing around in my head and the community’s collective consciousness.

I had been writing and recording songs as a hobby since my senior year of high school. By 2006 I had even released a few CDs and played some shows. Music was, without a doubt, my great passion. But there were several major barriers between me and committing to my journey as a musician: (1) It is incredibly unlikely that one will succeed in this line of work; (2) Success often comes at the abandonment of the passion or love that brought one to explore music in the first place; (3) The majority of successful musicians are doing no great service to anything but their own egos.

I couldn’t see devoting myself to an extremely risky line of work for the sake of nothing but my faith in my own talent. My studies at Guilford pinballed my professional future between subjects in which I have a peripheral interest: psychology, sociology, restorative justice, philosophy.

Then I discovered Quakerism.

I should say, I re-discovered Quakerism. Or: I was convinced (as Quakers like to say).

Examining My Roots – A Deeper Commitment

I grew up Quaker. I was well versed in the modern Quaker jargon, the institutional acronyms, the banter of Young Friends, the songs of the camping programs and the schedules and rhythms of the FGC Gatherings. I thought I was as Quaker as they come. 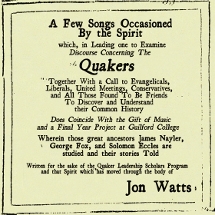 The Early Friends said that baptism comes inwardly and powerfully when we make ourselves open to the spirit of Christ. My senior project for the Quaker Leadership Scholars Program was such an opportunity. Tired of music being an isolated thread in my life, I was inspired to write and record a CD of songs about the Early Friends and the beginnings of the Quaker movement.

The experience was incredible, not just for the personal and moving stories that I uncovered about the Early Quakers, but for the way that the world seemed to rise up around me to supply the resources needed to make the project powerful, alive. In sharing that life with my immediate community of Guilford and the wider community of Quakerism, I‘ve seen its impact be deep, meaningful, transformational. I had found where my great passion meets the world’s great need.

Today, four years later, I spend my time traveling among Friends, exploring art and ministry and our collective history. I see this as being sacred, and very important, work and I am well supported in doing it.

Certainly I would not have discovered such a perfect, unconventional way to use my specific set of gifts had I not been given the opportunity to explore vocation in the safe container of Guilford College. I think of it as threading a needle (or threading several at once), which takes a lot of trial and error, thought and space. It is invaluable that undergraduates be given the space and guidance to do this explorative work, and I am always glad to know that Guilford and QLSP are still out there, helping to shape our soon-to-be ministers, musicians and leaders.

One thought on “Where My Great Passion Meets the World’s Great Need, Or, How Music Became My Ministry”